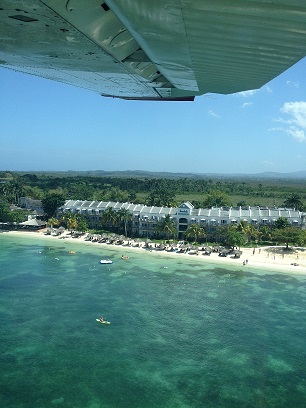 Sue and Gary recently returned from Sandals, Negril, Jamaica.  This particular Sandals Resort has always been a favorite because of 7 mile beach and the laid back attitude of Negril.  It has been a few years since our last visit and we noticed some positive changes and improvements.  In addition to the newer Crystal Lagoon area, the entire Paradise block of ocean view rooms (club level) have been updated and renovated to a more upscale contemporary design, rather than the former tropical, flowery Caribbean design.  The new look is clean, bright and refreshing.  Having said that, the older section located in the Caribbean Beachfront Village (Bamboo Grove building and Coconut Cove building) is in serious need of major renovations.  Rumor has it that the entire section will be completely rebuilt with all new rooms.  No specific times as to when this is to take place.  One of the great features of this resort is that it is laid out parallel to the long beach, with most of the restaurants open air and right on the beautiful Caribbean Sea.  The property was quite full during our stay, yet wait time for unreserved restaurants was minimal. The dive operation is exceptional at Sandals Negril thanks to uber longtime employee Barney.  We ended our trip with the 15 minute air transfer from the Negril Aerodrome to Mo Bay airport and it was (as usual) a BLAST!  Ask us about this fantastic resort.