Just back from Sandals Barbados!!! 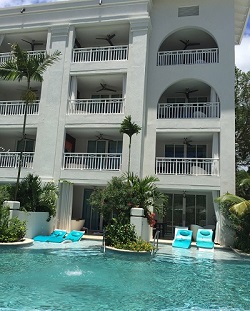 Sue and Gary  JUST returned from a great stay at Sandals Barbados. The resort layout is just about perfect making it easy to get around. We had a very nice room with a soaking tub on the patio. We laughed and said that it would take a LONG time to fill up the tub but were proved wrong. We were both amazed at the water pressure in our room tub and shower and have never seen that at any Caribbean resort. The air conditioning worked great, which is extremely important when it is hot and humid. We especially enjoyed the pool options and spent most of our time at the pool that wound its way around the swim up pool rooms. While many resorts have this type of pool set-up this is the first resort which built this type of pool wide enough to actually ENJOY as a pool and get enough sun during the day to keep it warm. The restaurants were all fantastic with many different choices of cuisines and menu options with lobster offered at a few as well. We enjoyed the new Indian option, the Bombay Club and were amazed that the menu was similar to our local Indian restaurant (without the after effects of indigestion that sometimes accompany). Butch’s served one of the best (if not the best) pieces of Filet Mignon we ever enjoyed outside top level steak houses in the United States. Soy was fantastic for Sushi as an appetizer or an entire meal. Our room and the entire property was spotless. Our butlers Curtis, Jane and Sharlene provided us with little extras and we enjoyed getting to know them individually. We feel that one of the MOST important things at a resort is the staff and how they treat guests. Sincere service is easy to spot and the staff at Sandals Barbados shines and they sincerely appear happy to serve going out of their way to provide great service. All of the staff, from front desk to servers to gardeners, were excellent. We would like to give a special thank you to Joy-Ann at the bar for her upbeat personality, sincerity and kindness. The hotel is at the far end of St. Lawrence Gap if you want to look for a small bar or restaurant or just some souvenir shopping (keep your eyes open for pot holes, bad sidewalks and cars). The resort can be noisy and is still a work in progress as they add more rooms.  We enjoyed our stay and look forward to someday returning.